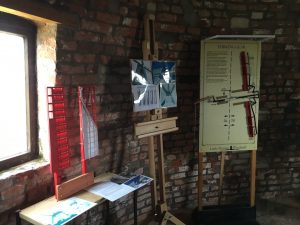 The common sail is the oldest and simplest windmill sail. It comprises a trellis like framework over which sail canvas is spread. The amount of canvas used depends on the strength of the prevailing wind and the work required of the mill. Excess canvas is rolled or furled and tied, just like that on a sailing ship

The simplicity of this method of regulating the mill is also its greatest downfall. To alter the setting of the sails the miller must bring the machinery to a halt with one sail vertical. He must then climb up on the sail bars to furl or unfurl the canvas and securely tie it at the desired setting. The mill sails must then be rotated to bring another one to the accessible vertical position and that one adjusted.

Considering that this process must be repeated four times it is easy to see how time and effort consuming it was. In wet or freezing conditions the canvas would be particularly difficult to handle. Imagine the panic in the face of a rising wind and impending storm!

Shutter type sails were first seen in the first half of the 18th Century. Shutters, made from wood frames covered with canvas were fitted to pivots in such a way that the wind would force them open. By then linking the shutters of a sail together, and providing springs to resist their opening it was possible to regulate the speed of the sails despite varying wind force. Spring sails still had the disadvantage that any adjustment required stopping the mill four times, and adjusting the springs on each sail individually.

In 1807 William Cubitt patented a sail design which was to become the most successful (and final), type and which was generally referred to as “The patent sail”.
Cubitt’s design featured the same idea of pivoted shutters linked together as did the spring sails, but extended the linking bar to the root of each sail, and from there to a system of levers connected to a rod extending through the centre of a hollow windshaft. This rod was referred to as the striking rod, and the cluster of levers at the end of the windshaft became known as the spider.
By this relatively simple method Cubitt at once eliminated the need to stop the mill for sail adjustments. The inner end of the striking rod was connected to a chain carrying weights which pulled the sail shutters closed. A strong gust of wind would open the shutters, pulling on the striking rod and ultimately lifting the weights. As the wind abated the weights would return the shutters closed. The point at which this happened, and hence the speed of the mill machinery, was controlled by increasing or reducing the weights used.